There's a meme on Facebook asking everyone to identify 10 books that have stayed with you. Here's what they are for me. 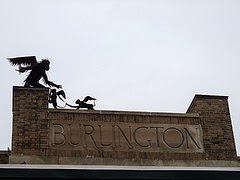