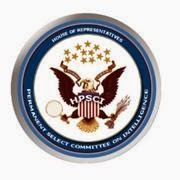 The secretive House Intelligence Committee (HPSCI) held an organizational meeting on January 28. HPSCI, in its conduct of its meeting, may have violated the rules of the House of Representatives. The committee has not posted video of its proceedings and apparently did not provide required public notice of the meeting.  At these meetings, each committee debates and adopts rules for its operation, an oversight plan may also be adopted, and other business takes place.

House of Representatives Rule 11(e)(5)(a) requires "to the maximum extent practicable, each committee shall... (A) provide audio of video coverage of each hearing or meeting for the transaction of business in a manner that allows the public to easily listen to and view the proceedings; and (B) maintain the recordings of such coverage in a manner that is easily accessible to the public."

Nowadays, committees provide notice of upcoming meetings at the congressional website docs.house.gov. A review of meeting notices for the week of January 28th, however, indicates there was no posting for HPSCI.

The Committee likely did provide notice of the hearing on its webpage, although there is no way to know when it was posted. However, that likely is insufficient. House Rules 11(g)(3)(C) require "an announcement made under this subparagraph [by the committee chair concerning meetings and hearings] shall be published promptly in the Daily Digest and made publicly available in electronic form." Under the Electronic Posting standards, promulgated by the Committee on House Administration, all committees must post documents, including public notices, on a central website... which is docs.house.gov.

Of all the congressional committees, the House Intelligence Committee is the most secretive -- even more so than the Rules Committee, which governs how the House itself works. And yet because of the nature of HPSCI's work, it's important that it be as open as possible so the public can have confidence in the work it does. That confidence must be earned starting on day one when the committee establishes the rules under which it operates.

A coalition of organizations from across the political spectrum released recommendations on how HPSCI could be more open while still meeting its mandate. Those recommendation (letter, white paper), were they to be put into effect, would have been voted on that first day. The Committee needs a do-over.

NB: I have not asked the committee for comment, but I'm sure they'd be happy to hear from you.
Posted by Daniel at 3:26 PM